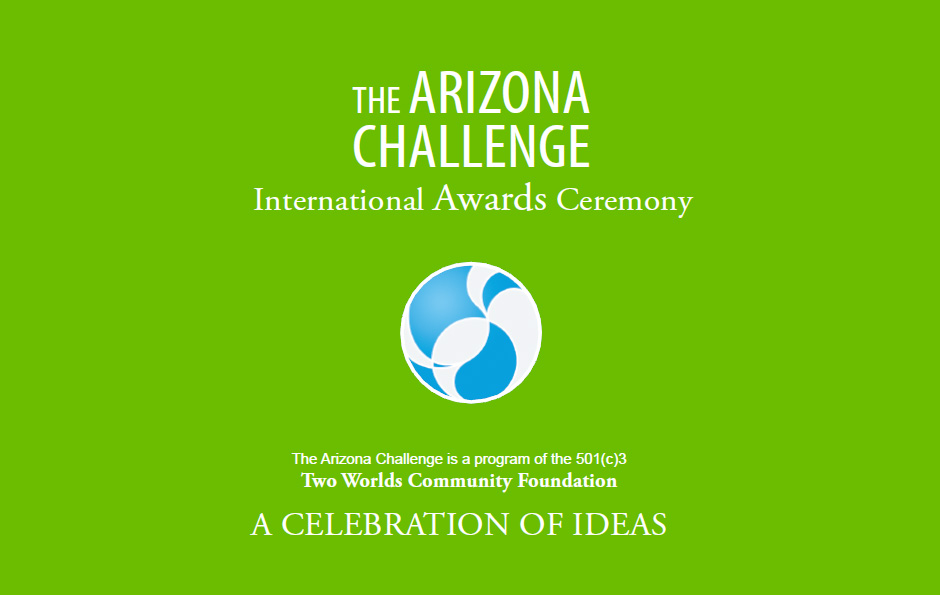 The Arizona Challenge is an International Student Competition focused on a positive future for how we design and live in ecological beauty inspired by Arizona’s special spirit and energy.
The next step in this process is a series of design forums, open to the public and held throughout Arizona’s Centennial Year. The educational role of the Two Worlds Community Foundation is to explore, design and present a range of possible futures. We see Arizona as the most fertile environment for the kind of fresh thinking that is more inventive, sustainable, and livable for all ages and stages of life.

Please join Phoenix Mayor Phil Gordon and Tempe Mayor Hugh Hallman, as we welcome the Teams from the University of Arizona; China’s Qingdao Technological University and Harvard University / University of Toronto who will be presenting their winning entries followed by a discussion of matters both exciting and critical for Arizona and beyond.

“I want to applaud all those who helped create this Challenge, not just because of what it does, but because of what it requires each of us to ask ourselves. There is something inside each of us that knows there is a relationship between where we live, how we live, and what stirs in our hearts and minds and souls. But the Two Worlds Community Foundation has put a laser focus on it, inviting the most thoughtful and talented people from across the globe to engage with us in this exploration.

Before I introduce the inspired team that brought us Autonomous City, I would like to read to you the passage in their responses that most affected me, and, I think, cuts to the core of what we are gathered here to celebrate. It is short: In talking about their design, they say, “The notion of place and consequence are reestablished. There is truth, beauty, and justice in this promise.”
What is most engaging to me about Autonomous City is that it takes the realities of this earth and shrinks them into multiple and smaller earths. The small-scale earths don’t allow perpetuation of the myth that the problems we create can be addressed elsewhere and later. Autonomous City requires us to confront reality here and now.

These small earths encourage less waste and greater sustainability. I think they are also less prone to the extremes between poverty and shameful excess. In their own words, “The enhanced relationship of one to their place and reliance upon it establishes a clarity of cause and effect, of one’s behaviors and impacts. Simply there is a great directness of consequence that does not exists today.”

“Arizona has long been an arena for innovative, large-scale planning. The Arizona Challenge goes beyond any such accomplishments to envision communities specifically suited to the dynamics of the 21st century. If our planning, behavioral, and ecological disciplines could be artfully integrated, how might that inspire provisions and relationships of community that are both more affordable, and more caring, while being more beautiful and sustaining for all ages and all stages of life.”

The five winning entries were selected by a seven member jury that met on May 23, 2011. The first place team included students from Harvard University’s Graduate School of Design and the University of Toronto.