1. Your Vision of the Future: Describe your most optimistic view of the future and how that can be supported by your proposal.
“Emerging from the collapse of the global financial system and facing both the `peaking of our single most important energy resource and a population whose demographics are changing rapidly, the default form of North American (sub)urbanism is confronted by particular challenges. The densest cities struggle to import goods and resources with logistical routes choked off while those inhabiting the most sprawling areas struggle to cope with the vast expanse and lack of personal mobility.

“Exhausted and taken to its logical conclusion, our current urban form is faced with a broad series of conflating forces which are poised to challenge its present conception. New settlement patterns emerge from this diffuse patchwork of more or less built form...”

“Enclaves of self-reliance and resilience will be established as new territories beyond the current urban reaches. These net-zero communities will embed themselves in the landscape and be linked strategically to the infrastructure of resource cycling and production systems which sustain them. They will serve as models for the future and as concentrations in a dispersed landscape, they will be independently, self-sustaining and self-contained cities. As they duplicate, a network of compact autonomous cities will emerge and connect to form an extensive web.”

2. Core Ideas” List and describe elements or Features in your concept that most differentiate your proposal from current practices.
• “The city is compact and self contained: It will be established with vision and in response to the physiology, hydrology, and ecology of its context. Logical boundaries are formed with a vision worked toward without wanton, haphazard growth beyond the carry-capacity of the city-locale.
• Self-reliant: The city is a site of production and consumption with all waste, effluents, and emissions seen as resources to be recovered and cycled to replenish and feed the closed-loop system.
• From core to spine: The dated notion of the ‘core’ is replaced by a looping spine that centralizes service and offers high order transport. In place of the voided core, ecologically-based waste reclamation areas and production sites occur that supplement neighborhood and home-scaled agriculture.
• Low tech meets high tech sustainability: Passive and active systems are designed to work holistically in a joint landscape, city, and building scale. These environments rely on orientation, self-shading, passive heating and cooling, and courtyards of the mat-building fabric for highly efficient performance. The porosity enables lush garden courts of native planting where rainwater is reclaimed for use. This is enhanced by leading edge green technologies, all powered by solar fields extending beyond the city.”

3. Community and Family: Is your design contributing to the way community and family behaves within urban environments, and what will be the differences between your proposal and current settlement patterns in the southwest.
“The establishment of these new settlements as autonomous is paramount, foregrounding that necessity of the cycling and renewal of waste and by-products for the survival of the community. The notion of place and consequence is reestablished. The notion of ‘somewhere else’ disappears when water, food, energy, and so forth do not come from ‘somewhere else’. The system and community rely on a balancing of production and consumption. Excess is counter-productive. The city much akin to an ecosystem holds a carry-capacity. This is not to imply a kind of communal utopia, rather communities, families, and individuals are seen much as they are today. This enhanced relationship of one to their place and reliance upon it establishes clarity of cause and effect, of one’s behavior and impacts. Simply, there is a great directness of consequence that does not exist today.” 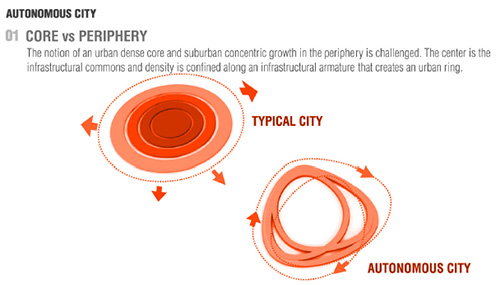 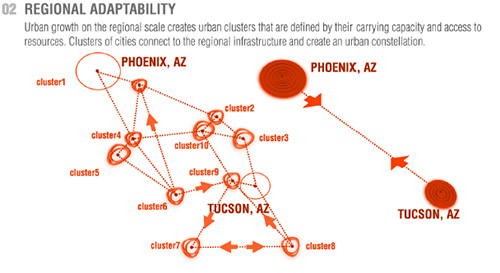 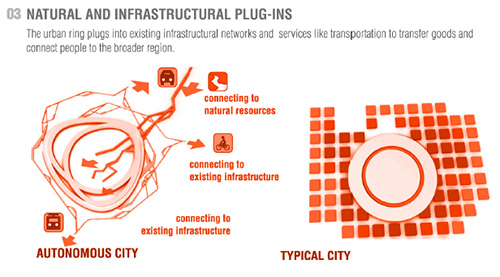 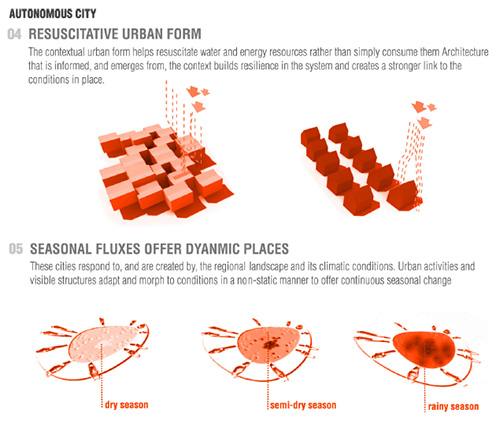 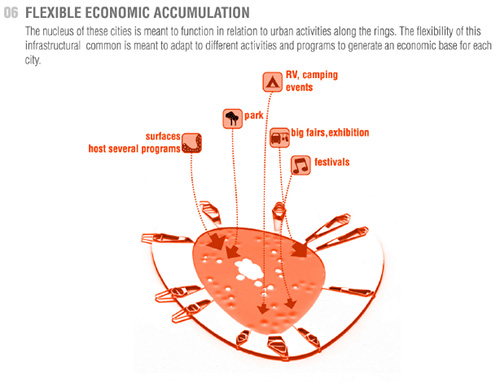 Aerial Rendering of the “Autonomous City” 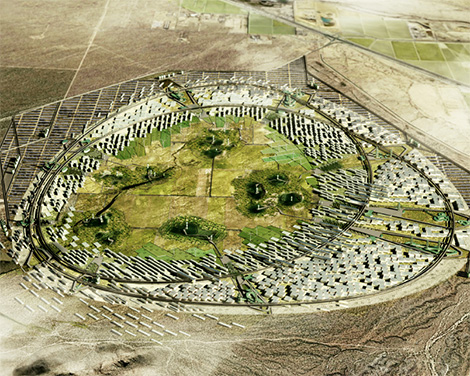 An important element of the Arizona Challenge was to explore how and to what extent a physical plan could provide positive behavioral insights for the life of the community. The Autonomous City narrative included this clear answer which relates to the central, multi-purpose open space shown above. “The City is a site of production and consumption with all waste, effluents, and emissions seen as resources to be recovered and cycled to replenish and feed the closed-loop system…” (Thus for those who live in a community) “An important sense of place and consequence is reestablished. The notion of ‘somewhere else’ disappears when food and energy do not come from ‘somewhere else.’ The individual features in the perspective rendering are highlighted on the previous two pages.

Photos taken at the Award Ceremony