Broadacre City and the Taliesin Equivalent

This is a competition for renewing and furthering the vision described by Frank Lloyd Wright in four of his books, and for which he planted the demonstration seeds by way of his life and work as the creator/resident of the Taliesin Fellowship. Broadacre City was Wright’s proposal for a new form of city that would emerge from the decentralizing forces of technology. While the accuracy of his prophecy in its most basic sense is now history, the greater goal for our cities and towns to become living works of art, is yet to be achieved.
What makes this all so exciting is that subsequent societal changes, now make what Wright wanted to see happen, both more possible more desirable, and more essential.

From Conflict to Community
The Ultimate Adventure

This next publication to come from the Two Worlds Community Foundation goes beyond today’s limited focus of planning theory to look at what can be learned from the utopian visions of history, along with the record of the world’s fast-growing “squatter” settlements and other dynamics of 21st Century life, including the growth of shared uses replacing and augmenting ownership. From Conflict to Community, provides a comprehensive overview of the trial and error experience of others. Along the way it analyzes a variety of specialty communities, all in the context of religion, culture, science, technology, economics and employment.

Frank Lloyd Wright in 1935, working on the model shown to the right. 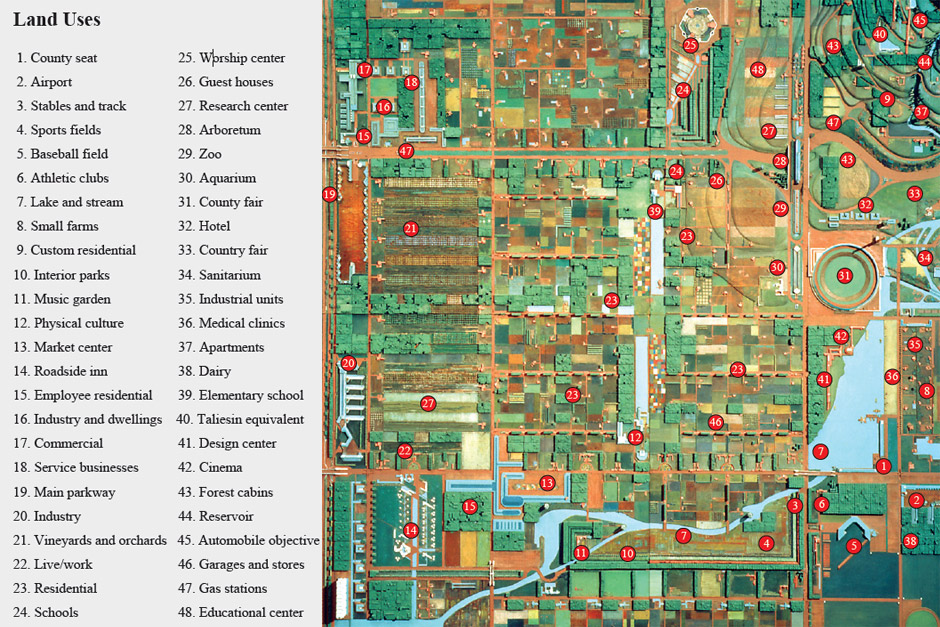 Broadacre City and the Taliesin Equivalent

This next competition represents the coming together of Frank Lloyd Wright’s life-long commitment to Broadacre City and the Taliesin Fellowship. Taliesin was the setting of the life, work and high-performance activities that he designed for himself and the citizen apprentices with whom he lived and worked throughout the last 27 years of his long and productive life. It was with this group that Wright created his concept for Broadacre City, which along with its auxiliary models and drawings, has traveled all around the world. Wright’s books, describing this post-industrial revolution, more decentralized form of urban settlements included The Disappearing City (1932), When Democracy Builds (1945), The Living City (1958), and The Industrial Revolution Runs Away (1969). All four books were dedicated to giving this new pattern of multi-centered communities the benefit of a more ordered, artful form. In addition to the complex integration of innovative buildings types, Wright’s comprehensive approach included the architectural design of roads, freeways, bridges, and all other aspects of the built environment that would be affected by the growing dominance of personal transportation. Wright saw all of these elements as matters to be designed as part of the coherent idea of the new city. His well documented concepts included the seamless integration of singe-family residences, attached houses, including those over shops and industry, fourplexes, mid-rise buildings combining residential and office uses on the same level, along with ground-floor retail. Special-case provisions included residential and farm uses under the same roof along with a more general orchestration of public facilities including airports, stadiums, inns, cultural, parks, and a variety of decentralized market centers that didn’t exist at the time but are familiar in the present.

In keeping with Wright’s concepts, we are only now beginning to think of housing, transportation, food production, and an abundant supply of clean air and water as highly coordinated, self-generating systems. With his organic architecture, the world’s most celebrated architect set the stage for what we now call smart, green, and sustainable, saying, “It is quite impossible to consider the building as one thing, its furnishings as another, and its setting and environment, yet another.”

What Inspires This Competition?

Broadacre City can be appreciated in two ways, one more obvious than the other. That which is mostobvious is that everything associated with the digital transmission of information has increased the possibilities for decentralized settlements. Far less obvious is that Wright saw this new opportunity as not only leading to new patterns of urban form but to the creation of purpose-centered communities, not unlike the ones he created for himself. It is ironic that those who lived in the Taliesin Community would likely be among the last to think it could ever be replicated nor would they believe Frank Lloyd Wright would want to see that happen, which brings us back to Broadacre City. The legend that accompanies the model on the facing page, identifies 48 elements of which number 40 is listed as “The Taliesin Equivalent.” 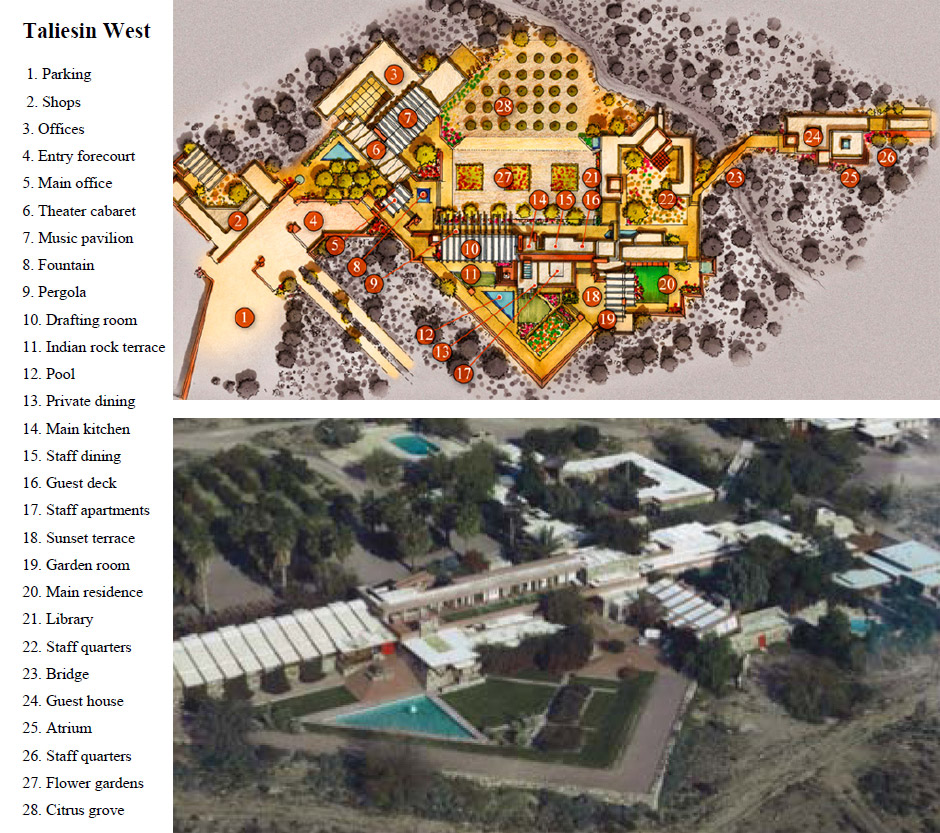 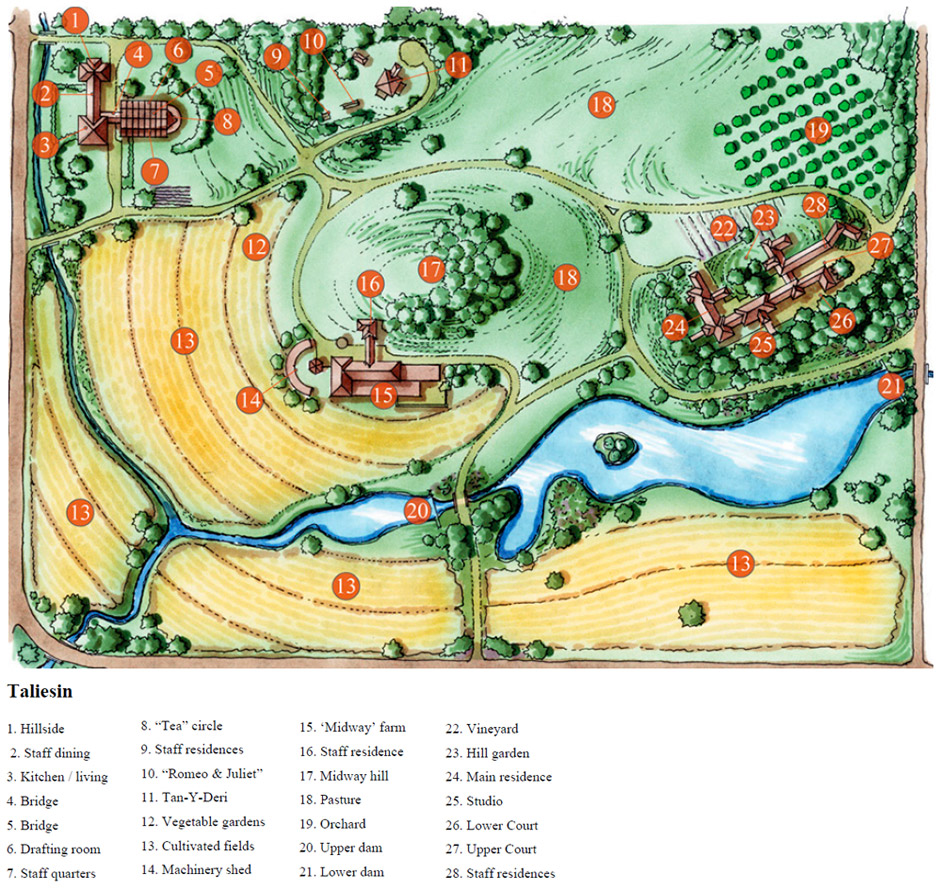 Taliesin and Taliesin West: While the integrated combination of these live/work uses portray the comprehensive nature of the competition, their purpose is to provide examples of the orchestrated behavioral, economic, and technological components that give meaning to the proposed concepts.